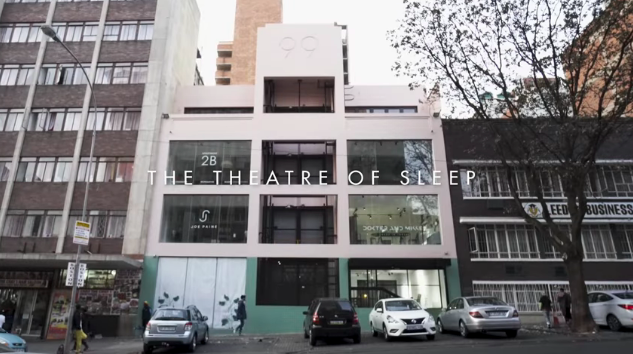 Weylandts created The Theatre of Sleep for 100% Design South Africa in collaboration with three young female industrial designers: Urbanative, Mash.T and Monique Vee. The aim of the campaign was to interpret the brief of ‘100% sleep’.

Weylandts explored four stages of the act of sleeping and dreaming, expressing each in a whimsical pod. Each pod, or stage, features specially commissioned pieces by the designers to showcase innovative designs that incorporated relaxing elements in a space that celebrates the quintessential refuge of the home.

Mash.T was founded by Thabisa Mjo, Mash.T focuses on telling uniquely South African stories through the medium of design. She is the curator of Sacrosanct, the first collective showing of SA designers at the Milan Design Week. She’s designed the Tutu 2.0 Pendant Light, the Most Beautiful Object in South Africa at Design Indaba 2018 and has won the 2017 Future Found Award and Best Product Design award at 100% Design 2016.

Monique Vee is a minimalist who explores the principal truth of designed objects from an analytical perspective. She is a Design Indaba Alumnus and has been cited one of South Africa’s top 10 young creatives to look out for. Vee holds a patent for suspended systems and her products have been showcased at 100% Design South Africa as well as featured at Vienna Design week.

Urbanative was founded by Mpho Vackier, a metallurgical engineer turned furniture designer. Urbanative explores African stories and cultural graphics by juxtaposing it with modern product design. Vackier’s accolades include being part of Design Indaba 2017’s Class of Emerging Creatives as well as having the Nenzima Desk nominated for Design Indaba 2019’s Most Beautiful Object.

Urbanative and Mash.T’s beautifully designed, industry-stimulating pieces saw them walk away with the coveted ‘Designer of the Year’ trophies — setting the benchmark for groundbreaking design in South Africa.

Mobile Has Become The World’s Premier And Competitive Marketplace