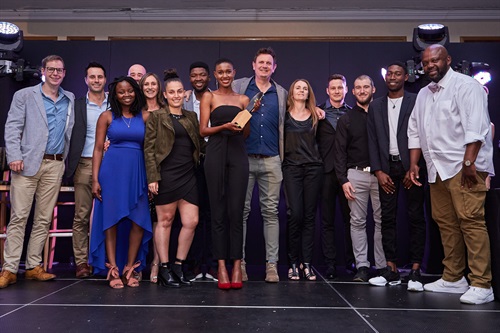 To leverage its global sponsorship of the 2018 FIFA World Cup, Coca-Cola introduced ‘Score Packaging’, limited edition cans and bottles bearing a single digit from 0-9. ‘Our task was to leverage ‘Score Packaging’ in a unique way to engage South Africans with Coca-Cola product at the heart of the conversation,’ said Tracy Bredin, Playmakers Head of Strategy.

A custom built #CokeScoreChallenge studio co-hosted by SABC 1 presenters featured inserts promoting the competition and educating viewers around the entry mechanic. Product placement of the ‘Score Packaging’ was used at half time and full time to reflect the score in the match. The #CokeScoreChallenge was a Twitter-based score prediction campaign, integrated into the live broadcast of all 44 FIFA World Cup™ games on SABC. Fans could enter by posting a tweet of themselves using Coca-Cola ®‘Score Packaging’ to predict the score using #CokeScoreChallenge @CocaCola_ZA. Correct scores were entered into a daily draw to win cash prizes.

Justine Cullinan, Coca-Cola South Africa’s Head of IMC said, ’The results for the campaign have been phenomenal for the brand. The FIFA World Cup is a key global asset for Coca-Cola and we are proud that South Africa featured so strongly in the global conversation around the event,’

‘As Playmakers, we are very proud that we have been able to elevate Coca-Cola South Africa’s FIFA World Cup campaign into a global conversation. We would like to thank Coca-Cola for their support of our agency and for this campaign. Without them and their incredible digital and social media team, this campaign would not have been possible. After many years of driving media innovation in the sponsorship space, we are delighted that our work has been recognised at the highest level in the media industry and we humbly thank the AMASA Awards for this acknowledgement. We have decided to create a greater focus around our media offering and look forward to making an exciting announcement around this soon,’ said Matt Ellenbogen, Playmakers Managing Director.