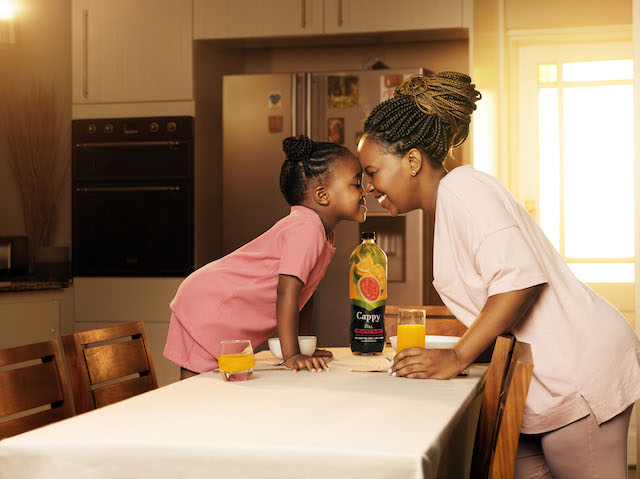 Coca-Cola Company has launched a new marketing campaign for its juice brand Cappy that invites consumers to ‘Nurture the Moment’. The campaign invites people to find the beauty in simple moments of connection and is being rolled out across TV, radio, outdoor media, digital and social media.

‘I’m excited about this campaign as it touches upon something this year has taught us – that family moments are important. Although life can be busy and complicated, no moment is too big or small to be nurtured by the bold and refreshing taste of Cappy,’ said Stephan Czypionka, Marketing Director for Coca-Cola Southern and East Africa.

‘Last year, we conducted in-depth consumer research before setting out on the creative process for this campaign. The Coca-Cola Company is focused on growing its juice offering across Africa so the team made sure data and customer insights were used to inform the brief and underpin the creative process,’ added Czypionka.

If there is one thing that this year has taught us, it is that the little moments matter. Perhaps working from home meant more time for a parent to linger with family over breakfast instead of rushing out the door. Maybe a work call ended early and they were able to play dinosaurs with their toddler. Despite the challenges of the past year, many of us found the beauty in these micro-moments of connection with our loved ones. ‘The campaign aimed to capture these heart-warming moments in a series of vignettes that reflect the change in mindset that many of our consumers have had over the past few months of lockdown,’ said Czypionka.

Compared to how it is typically depicted, Coca-Cola’s insights showed that juice is a versatile beverage that can be consumed anytime and on-the-go. So the campaign focused on showcasing the different moments throughout the day when juice is a preferred beverage of choice, emphasising its versatility. ‘It’s going beyond the classic territory where juice advertising sits, which usually just focused on the benefits of the beverage. This campaign elevates the product, bringing in that emotional connection. It’s the warmth and relevance captured by this campaign that sets it apart,’ said Czypionka.

Coca-Cola’s returnable glass bottles feature prominently in the latest Cappy Burst campaign, which features more than 200 pieces of content. Social and digital media remains a priority, but they are also rolling it out across the traditional platforms of radio and television. The beauty of digital is that the audience becomes an active participant in the campaign and naturally helps amplify content. The campaign invites people to share the special micro-moments in their lives on social media to keep the conversation flowing.

The company worked with Cullinan & Cullinan, a boutique advertising agency, on the campaign. ‘The team did an outstanding job in portraying everyday situations with warmth and humour. There was a natural chemistry amongst the cast, with the result that each vignette depicting relevant slices of life comes across as relaxed,’ said Czypionka.

‘I’m confident that the campaign will go global. It launched in South Africa first, and will be rolled out across Africa in 2021. There’s already interest from marketing teams outside of the continent looking to apply the campaign in their market, which is very exciting. The African marketing team has already established itself as capable of developing original marketing campaigns for export across The Coca-Cola Company’s universe and there is no doubt that ‘Nurture the moment’ has global appeal in a time of great uncertainty.’